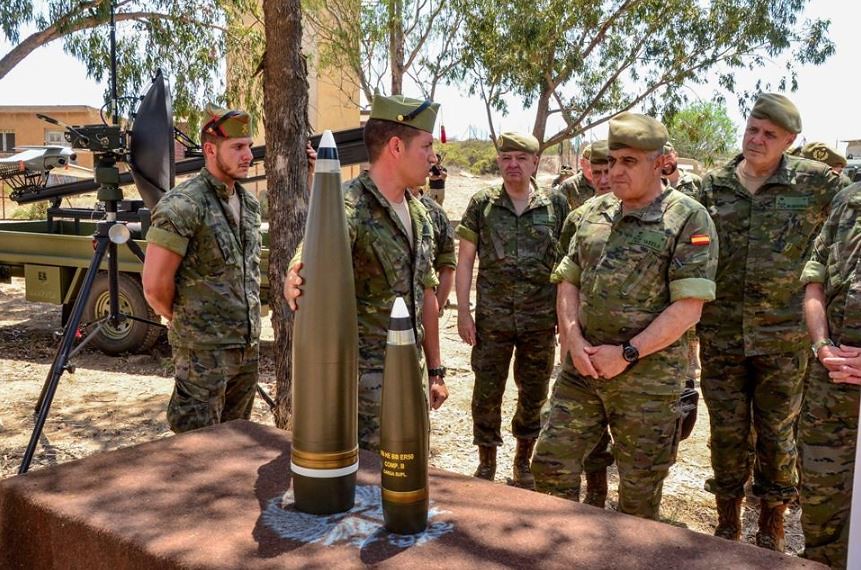 
YM: Coming back to artillery, have quite an ambitious programme for recapitalisation of artillery assets in Spain and also to replace M109s with a wheeled self propelled 155 mm system. Why a wheeled vehicle?

LT: Well, for the command and control system, yes. But [for the M109 replacement] wheeled is a personal preference. Both options have their advantages. But full tracked, self propelled guns are very expensive to procure. They are also more expensive to maintain, and in fact, the main reason for me to support the wheeled Option is that, as gunners, we don't really need full track vehicles, because we don't fight like tanks. We don't have to follow the tracks of the tanks. Most of the time we operate on roads, and so need to have all terrain capability, but we are not in the need of full track capability. And that’s why I think that it’s much better and much more affordable to have a wheeled solution. But in any case, as I have stated, it’s not up to me to decide.

YM: The Spanish army has a number of towed systems; why not convert them into self propelled artillery pieces? In a modern artillery engagement, you need to be mobile and there is a great emphasis on shoot and scoot. There is a company exhibiting right here, AM General, who have taken a stripped down M777 barrel, added a recoil absorption system and mounted it on a light truck. That would be a great solution to turn your towed systems into self propelled.

LT: In fact, that’s also my personal view. I think that the current towed gun we have, 155 mm Santa Barbara APU SIAC, is something that has to be upgraded, but has not to be changed. It is a good gun, and we can operate it very fast on the ground. And I don't know if you have checked the time to get into position, but in one and a half minutes, they can be ready to fire.

And it has all the things that, perhaps you have noticed the Italians are thinking about the modernisation of the FH70, but we have a ballistic calculation, muzzle velocity radar, we have semi automatic loading of ammunition, the laying is automatic, based on GPS and inertial navigation. So it can operate almost autonomously.

So I think there are not many things to upgrade in that gun. The only problem is that it is towed, okay. But it serves our purposes well for the time being. But in the future we have to replace the M109, so that’s why we are looking for a self propelled system. On the other hand, I think that we shouldn't get rid of the 105 mm light gun, because I think that is the proper gun to be employed by airborne forces for airborne assault operations.

Perhaps the solution you proposed to make that gun mobile it seems sensible because you can have, with base bleed ammunition, a range of up to 20 km with those 105 guns. So is that enough for that kind of operation. Most people say we need something lighter. But they, sometimes, it seems to me that they forget that something that you cannot make lighter is ammunition. So there is a real problem to support a firing unit with ammunition, to resupply that unit with ammunition. So for me, it could be a sensible decision perhaps to transform the 105 guns with that kind of mobile propulsion you spoke about.