The new CV90 turret, developed by BAE Systems Hägglunds in Örnsköldsvik, Sweden, represents a leap forward in design and functionality. The main weapon position is changed to provide even better vehicle balance and enable new ways to introduce a variety of weaponry for increased lethality. It also offers significant ergonomic improvements to benefit the vehicle’s crew.

Work is already underway to equip the Dutch CV9035 vehicles with several enhanced capabilities such as an Active Protection System (APS) and Anti-Tank Guided Missile (ATGM), as well as a new Electro-Optic Aiming System (EOPS) which gives additional situation awareness. The latest upgrade also includes future-proofing the electronics by upgrading to the fourth generation digital backbone, with embedded and more robust cybersecurity. 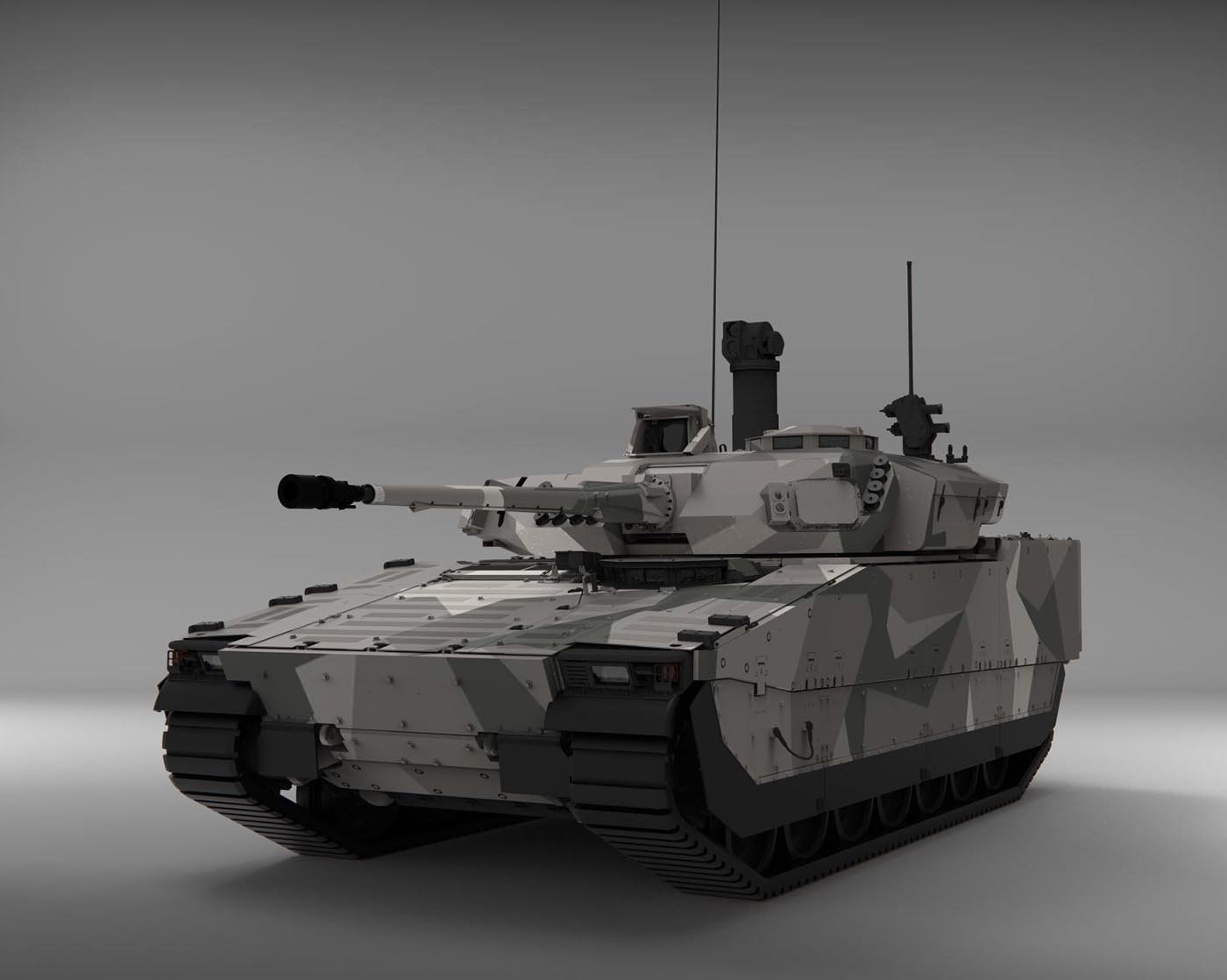 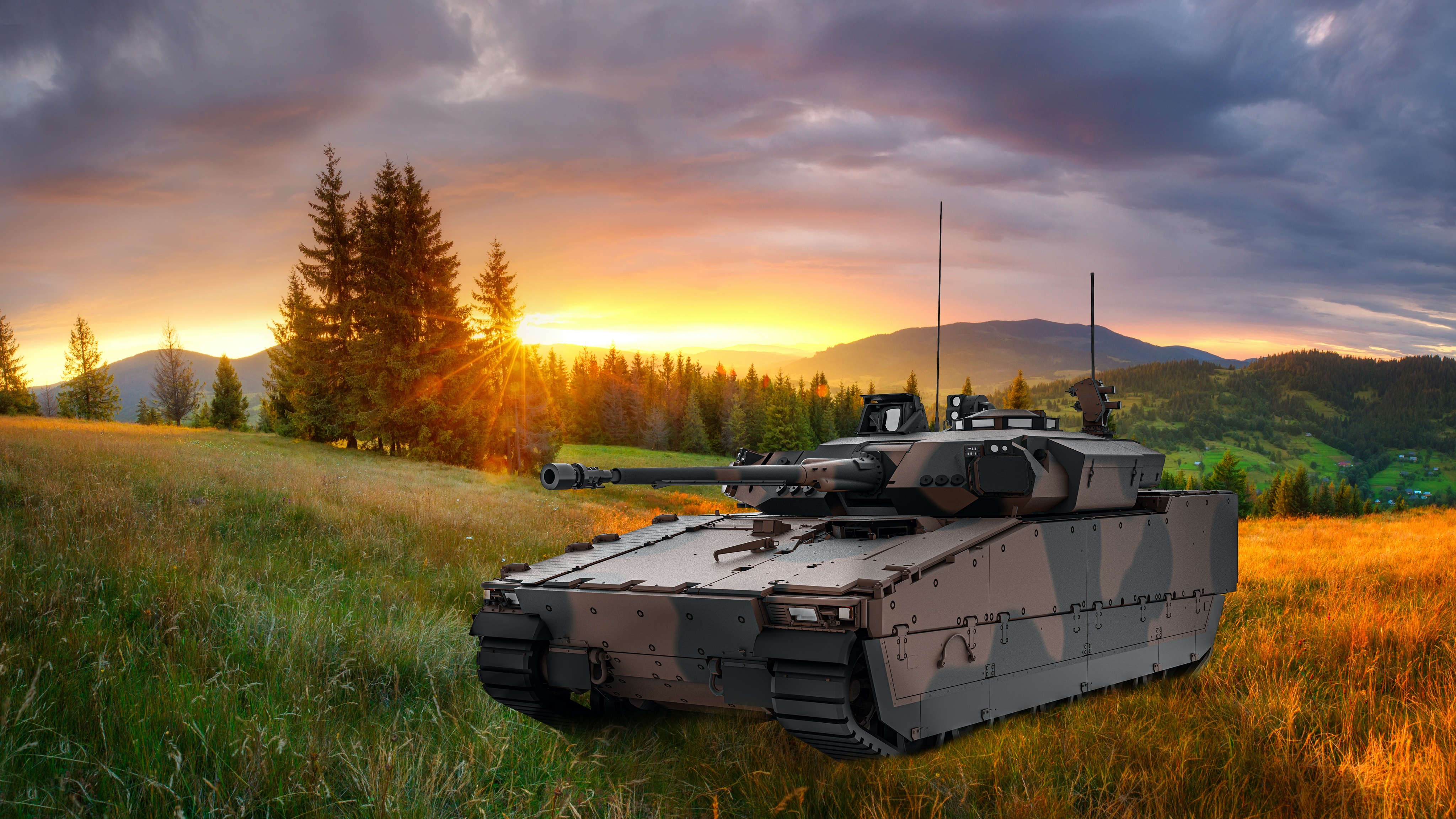 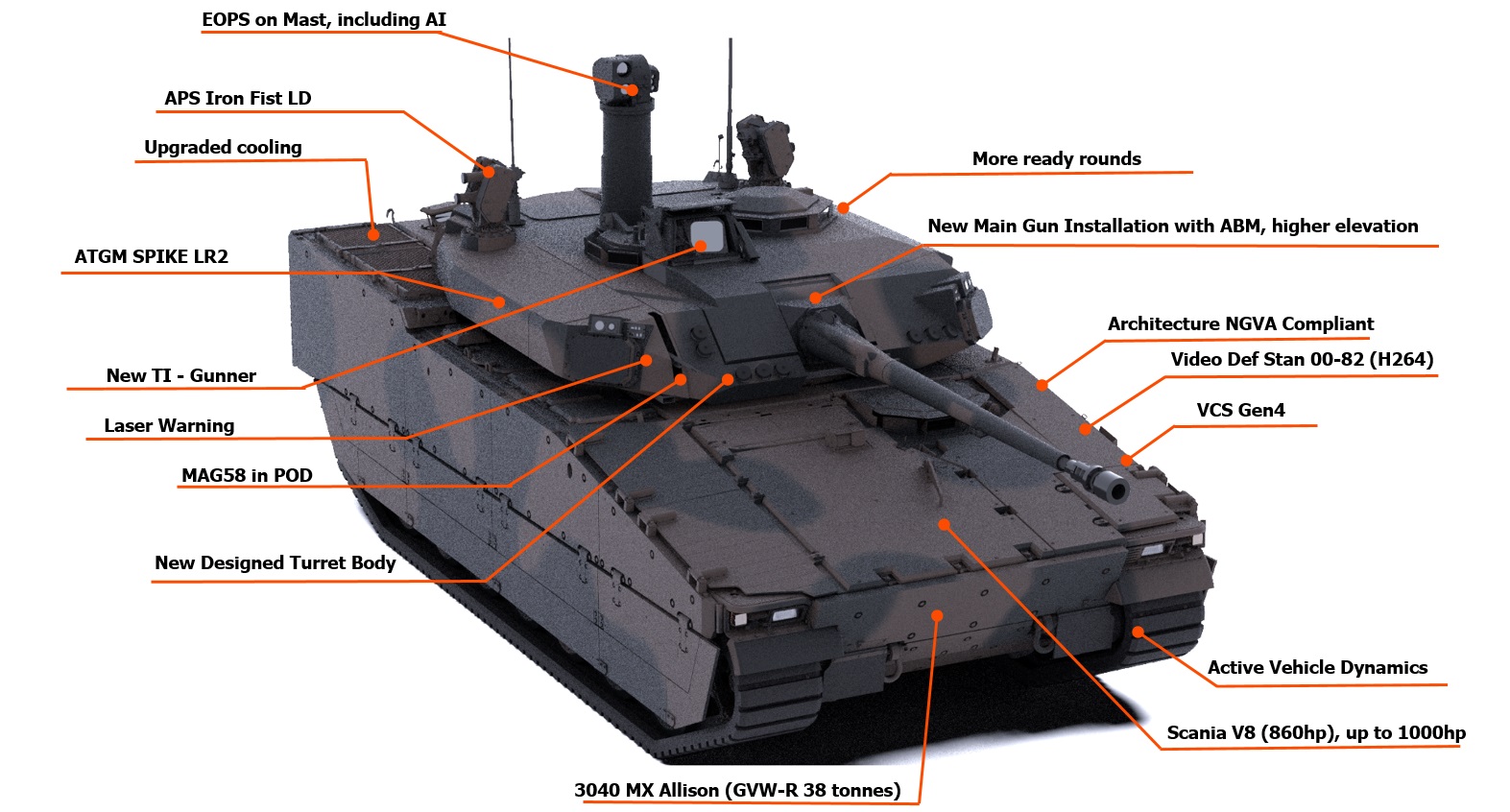 The programme was developed hand in hand with the customer, on one side the Dutch Defence Materiel Organization (DMO), for requirements issues, on the other with the Army itself, which provided the operational knowledge. Moreover operational and logistic feedbacks from the CV90 users club were also taken into the equation. “The result of that equation, agreed by all three parties, was that the best solution was to install a wholly new turret on the old chassis, reusing in the turret some of the existing capabilities that didn’t needed any type of upgrade,” Åberg adds. The system requirements were finalised in May 2020, when the definition review milestone was reached. It took then seven months to work on the contract details before reaching the signature in January 2021. Anticipating the contract by one year was due to the close cooperation between the Dutch military and the industry, and by the need to cope with ain in-service date established in early 2024.

The turret has been completely redesigned, although the structure remains based on steel, with add-on armour to reach the required level of protection, which of course remains classified. Another field on which company representatives did not elaborated is communications, as this is based on Government Furnished Equipment.

The current CV9035NL features a chassis-mounted daytime close-in situational awareness system, but lacks a 360° night observation capability. “To cope with this, a mast-mounted electro-optic head is being installed, located at the centre of the turret. It will provide all-round unimpeded vision at 10° negative elevation when the mast is raised 500 mm, allowing to avoid blind angles due to other sensors on the vehicle roof,” Åberg explains. Its identification range matches that of the new long range lethality effectors, the antitank missiles, both for the day and night channels the sensors head being also fitted with a laser rangefinder with a 10 km range and an elevation arc of –20°/+60°. The mast can be raised at whichever height, up to the 500 mm limit, the computer automatically correcting the parallax error according to the operating height. Overall the mast raises the sensors 600 mm over the turret roof level, the system being fully operational at maximum height and maximum speed, the sensors being fully stabilised. No details were provided on the type of sensor package selected by the Royal Netherlands Army, however the company representatives told EDR On-Line that all potential sensor suites include Artificial Intelligence algorithms to allow automatic target detection, reconnaissance, identification and tracking, in order to decrease the crew workload.

As anticipated, protection increase was not done by adding some tons of heavy metal or exotic materiel, but adopting an active protection system in the form of Elbit Systems’ Iron Fist LD (Light Decoupled) has been added.

As for firepower, the main 35 mm gun was retained without modification; guns will be removed from old turrets, they will be thoroughly checked, some components might be changed if needed, but definitely the 6,000 rounds barrel life is far from being reached by Dutch AIFV guns. In the new turret the gun has been moved forward by about 50 cm, allowing a series of improvements n various fields. First of all it freed some room inside the turret; in the new turret the commander and gunner will have no more the gun breech between them, which allowed to regroup them towards the centre of the turret providing a wider working space to both of them, that adds to the room made available by having moved the machine gun in an external pod. This allowed adding displays and other C2 related items. “Moving the gun forward also allowed us to fully redesign the ammunition feed, rounds now coming from the side, a more robust solution, which ensures a although the previous one proved pretty reliable,” Lindell explains pointing out however that “the most important effect is that this allowed us to increase by 20-25% the amount of ready rounds.” EDR On-Line understood that the Dutch vehicle might feature around a dozen more rounds compared to the current 70 available, however the final number is based on a balance between rounds and space. Another beneficial effect of moving forward the main gun is that maximum elevation will be greater than the 37° of the current turret, although no firm data were provided.

As said, the MAG58 machine gun was moved into an external pod. “Beside gaining space inside the turret, the main reason was to avoid gas inside the turret,” Lindell says, adding that the 7.62 mm weapon installed on Dutch vehicles will have 1,500 rounds available. That said, to reload it the crew will have to leave the vehicle protection, while obviously the machine gun is now less protected than in the past.

To solve the longer-range lethality issue a twin missile launcher was added, capable to host two Rafael Spike LR2 missiles. Located on the right side of the turret, with the missiles side-by-side, it is hinged at the back and rotates for some 45° allowing the launch of the missile, which in its ground version can reach a target up to 5.5 km distant. Three firing modes can be used, lock-on-before-launch fire and forget, lock-on-before-launch with redirection in flight, and lock-on-after-launch. The reload is done from the rear, with the launcher in the elevated position. The launcher is armoured, a compromise having been made between the need to ensure that the bas would vent out in case on detonation, and that to protect missiles from small arms fire. The launcher can also host Spike LR missiles, which range goes up to 4 km.

Obviously before receiving a brand new turret the chassis will be refurbished. “They will be submitted to a general overhaul,” Lindell tells us, “all subsystems will be checked and eventually replaced, while steel tracks will be replaced by new rubber tracks provided by Soucy of Canada. Even more important, both chassis and turret will be fitted with a new NGVA compliant vetronic architecture, “which will allow an easier replacement of sensors and other vetronic equipment along the years, these systems being usually those that become obsolete quicker than others due to technological breakthroughs,” Gabriel Åberg states. The new Vehicle Control System Generation 4(VCS G4) will be installed, as well as a wholly new electric system. Another key element is the adoption of a new antimine armour package, which increases the protection level, although here too data remain classified.


February 4, 2021 – Örnsköldsvik, Sweden – Clavister, a leader in high-performance cybersecurity solutions, today announces that the relationship between itself and BAE Systems Hägglunds, part of BAE Systems, Europe’s largest and the world’s third largest defence contractor, has produced its first end-customer – a major Western European military organisation. The contract agreed between BAE Systems Hägglunds and said organisation will see mid-life upgrades of CV90s (combat vehicles 90) carried out between 2021– 2025. To Clavister, the deal is worth a minimum of 50 MSEK, potentially increasing to 90 MSEK, according to the requirements set out by the customer. These figures would represent Clavister’s largest deal to date.

The extensive contract will see the mid-life upgrade of 122 CV90s, with an option for a further 19. The upgrades will include fitting each vehicle with more robust, embedded cybersecurity capabilities, including Clavister’s military-grade RSG-400 security gateway and RSW-400 secure network switch. Following the customer’s delivery plan, first shipments will take place in the second half of 2021, whereas the bulk of shipments will take place from 2022 through 2024. The long-projected lifespan of each vehicle may also provide further opportunities for Clavister to supply additional support.

The RSG-400 will provide protection ensuring only cleared users, systems or protocols can connect to the vehicle. Built around Clavister’s cOS core platform – the company’s internally developed operating software – the firewall solution has been augmented based on NATO and BAE Systems requirements. Equipped with military-grade enclosure and connectors, its ruggedised hardware can withstand extreme environmental conditions and significant physical attacks.

The ruggedised RSW-400 is a newly designed solution and will boost the resilience of the on-board network infrastructure relied upon by the crew to manage the vehicle’s many systems – such as weapons, cameras, battle command systems and engine control.

“This deal represents the biggest in Clavister’s history and we are very proud to be working alongside BAE Systems Hägglunds to provide next generation combat vehicle defences,” said John Vestberg, Clavister’s CEO. “The solutions we are developing will play a critical role in keeping nations safe and that’s reflective of us placing advanced technical specifications and engineering at the core of what we do. Protecting military personnel has evolved so much further beyond simply adding thicker armour around combat vehicles and we are dedicated to helping defence organisations to better prepare nations for cyberwarfare through specially developed solutions.”

The solutions are being developed in line with a framework agreement between Clavister and BAE Systems Hägglunds which has been in place since June 2020. The contract covers the application of the RSG-400 and RSW-400 into CV90 and BvS10 armored all-terrain vehicles, as well as after sales support and ongoing services, with the lifecycle of some military vehicles lasting around 30 years.

“Whether thinking of jets, ships, tanks, or vehicles, they have become data centres in the air, sea and on wheels or caterpillar tracks, and their onboard networks are now a critical component of warfare,” continued Vestberg. “They need to be protected with specialised cybersecurity so they can repel a complex hacking attempt just as well as it can a rocket attack or freezing temperatures to ensure those within are safe and can continue to carry out operations. Cybersecurity can no longer be an afterthought and mid-life upgrades provide the perfect time to embed capabilities into vehicles already in service.”


Haifa, Israel, February 7, 2021 – Elbit Systems Ltd. (NASDAQ: ESLT, TASE: ESLT) (“Elbit Systems”) announced today that it was awarded an approximately $82 million contract from BAE Systems Hägglunds AB (“BAE Systems Hägglunds”) to supply the Royal Netherlands Army (“RNLA”) with Active Protection Systems (“APS”) and electro-optical commander sights. The contract will be performed over a period of four and a half years.

Under the contract and as part of the modernization program led by BAE Systems Hägglunds, Elbit Systems will equip CV90 armored combat vehicles of the RNLA with Iron Fist APS and Commander Open Architecture Panoramic Sights (“COAPS”).