The duration of the flight was 65 minutes and included test points to verify basic handling and flying qualities at different altitudes and speeds. The main purpose was to verify that the aircraft behavior was according to expectations.

This aircraft is the first Brazilian production aircraft and will be used in the joint test program as a test aircraft. The main differences compared to the previous test aircraft are that 39-6001 has a totally new cockpit layout, with a large Wide Area Display (WAD), two small Head Down Displays (sHDD) and a new Head Up Display (HUD). Another major difference is an updated flight control system with updated control laws for Gripen E. It also includes modifications both in hardware and software.

39-6001 will now join the test programme for further envelope expansion as well as testing of tactical system and sensors.


Saab, together with its Brazilian partners like Embraer, Atech, and AEL Sistemas, recently inaugurated Brazil's first Systems Rig (S-rig) Gripen simulator at the Gripen Design and Development Network (GDDN), at the Embraer plant, located in Gavião Peixoto, São Paulo State. This is the first Gripen simulator to be installed outside of Sweden and is a part of the Sweden-Brazil technology transfer program.

The new simulator will enable GDDN to conduct more development projects in Brazil.

The simulator will play an important role in the Gripen development at GDDN; it will be used for development tests and verification of systems, sub-systems and functionalities of the aircraft. The systems rig will be compatible with systems developed by Saab, Embraer, Atech, and other partners at the GDDN.

The simulator will also support the activities of the Gripen Flight Test Center (GFTC) which will be installed at GDDN in 2020.

The service signed a memorandum of understanding with Avibras to develop the weapon, called the MICLA-BR, it said on 23 November.

The air force will share its expertise and missile needs for the project, but has not disclosed the effort’s cost.

The manufacturer is also working on a truck-launched cruise missile called AV-TM 300, development of which is to be complete by the end of 2020.

The MICLA-BR is an adaptation of the AV-TM 300. The air-launched variant lacks the ground-launched type’s fold-out wings, but otherwise looks similar. The Brazilian air force has said it wants the cruise missile to have a range of 162nm (300km).

The air-launched cruise missile project is part of the Military Strategic Plan for Aeronautics (MICLA-BR), and in 2019 was among the Brazilian air force’s 18 strategic projects, others being the Saab F-39 Gripen fighter and Embraer KC-390 transport.

“Within [the Brazilian air force’s] strategic projects, this is one of the most important,” says Kanitz Damasceno, Lieutenant Brigadier General with the air force. “It will be the realisation of a project for the actual use of a warplane, which is the F-39 Gripen.”

It is unclear for which missions the Brazilian air force intends to use the MICLA-BR. The service has not disclosed its purpose, but said the missile could be used in “various scenarios”.

The Brazilian air force says it wants to create a family of similar missiles from what it learns by designing and building MICLA-BR.

The number of missiles the service plans to buy was also not disclosed. Brazil has few enemies, near or abroad, so is unlikely to buy large numbers of the new weapon. It appears the country wants to make money and boost local hiring by exporting the weapon to foreign militaries. 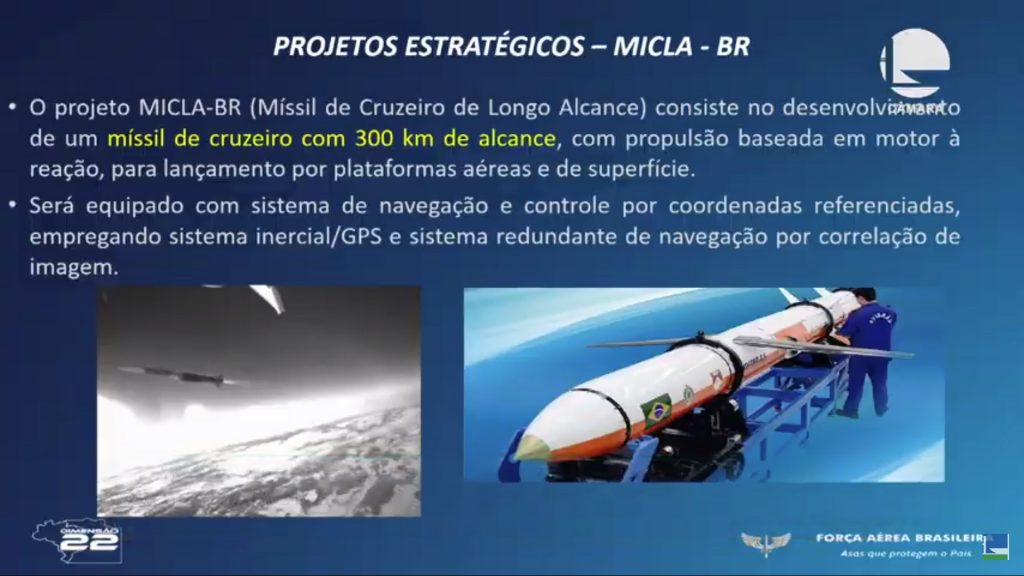 
The service explained its plans in two interviews with Brazilian media on 1 and 2 June.

In total, the Brazilian air force aims to buy between 60 and 70 examples of the Gripen E/F, a fighter that it renamed the F-39E/F. That’s up from an initial order of 36 aircraft.

“We bought the first batch, but our expectation is that it will be somewhere around 60 or 70 aircraft,” said commander of the Brazilian Air Force, Lieutenant Brigadier Carlos de Almeida Baptista Jr., in an interview with Valor Economico, a financial newspaper in Brazil on 2 June. “Soon, it will be time to start talking about a second batch. With a country the size of Brazil, you can’t talk about just 36 fighter planes.”

It is not clear what share of the larger 60- to 70-aircraft order would be built in Brazil. Embraer did not immediately respond to a request for comment.