An additional 420 Light VBMR units are to be ordered, taking the total to 978, according to Erwan, the director of the Scorpion modernization program at Direction Générale de l’Armement procurement office. Erwan, whose last name is not used for security reasons, spoke to the press May 16.

In addition to the highly equipped 489, there will be a further 200 units ordered, with the latter more lightly equipped units, according to the annex of the draft multiyear military budget law for 2019-2025.

A wide spectrum of missions will be covered, as there will be 16 versions of the vehicle, with 10 of the APC, two for recon and four for comms.

The Light VBMR weighs 15-17 tons, can reach a speed of 100 kph and has a range of 600 kilometers. That weight compares to the French Army’s initial requirement for a 10-ton vehicle, before industry called that unrealistic.

The vehicle is armed with a remote controlled 7.62mm machine gun, a minigun at the rear and self-protection with a Galix smoke dispenser.

France is also to order an upgrade for 200 Leclerc main battle tanks, with a first delivery of a modernized tank in 2021, Erwan said. Sensors and the Bull SICS battle management system, or Scorpion Information Communication System, will bring the tank into the Scorpion’s so-called collaborative combat concept, which seeks to heighten teamwork on the ground and with commanders at the regimental level.

An order for the Griffon multipurpose troop carrier is to be raised to ”a target“ of 1,872, up 150 units from a previous total, Erwan said. A first delivery is due by the end of the year, with certification in the second quarter of 2019. Some 936 units are due by 2025.

Contracts for those increased orders are expected to be signed later this year after the French Parliament formally adopts the draft military budget law, expected in July.


Jaguar strapped to the nines with sensors, weaponry and a paint job


That industry team is putting two prototype vehicles through tests to prepare for a certification, with a further two without turrets, dubbed ”mobility benches.“

An executive at the press briefing forcefully rejected previous media reports of the limited space on French railway carriages forcing there to be an MBDA MMP missile launcher on just one side of the Jaguar turret, while an export version will have launchers on both sides.

“I am very angry,“ he said. There had been a French Army preference for the launcher to be on only one side.

The order for the Jaguar has been boosted by 48 units to a total fleet of 300, said Erwan, director of the Scorpion program at the Direction Générale de l’Armement procurement office. Erwan’s last name has not been provided for security reasons.

Contracts for the increased orders are expected to be signed later this year, after the French Parliament formally adopts the draft military budget law, expected in July.

Protective equipment on the Jaguar include a Thales Barage ― an active jamming device that targets improvised explosive devices ― and two sets of Antares, a missile warning alert system, 360-degree coverage.

The Griffon troop carrier and Light VBMR reconnaissance vehicle will each have one set of Antares, and the equipment will also be fitted on the Leclerc tank and VBCI infantry fighting vehicle.

Jaguar will also be fitted for — but not with — Diamant, an active blocking system from TDA, a Thales unit.

The Army asked for the driver and gunner to have simple optical sights rather than depend on video and optoelectronic systems. The Jaguar is powered by a 500-horsepower engine, allowing the vehicle to reach a maximum speed of 90 kph. The vehicle’s endurance is 800 kilometers.

Jaguar will be plugged into the Bull SICS battle management system, or Scorpion Information Communication System, and the Thales Contact software-defined radio ― tools that underpin the so-called collaborative combat concept, which seeks to heighten teamwork on the ground and with commanders at the regimental level.

RTD supplies the chassis, rather than Texelis, a specialist company which supplies that equipment on the reconnaissance vehicle Light VBMR.

Jaguar is a wheeled vehicle, but its design architecture is that of a tank, an executive explained. The driver sits in the front of the hull and the power pack at the back, the executive added. The vehicle can hold a three-strong crew, with two sitting in the turret. 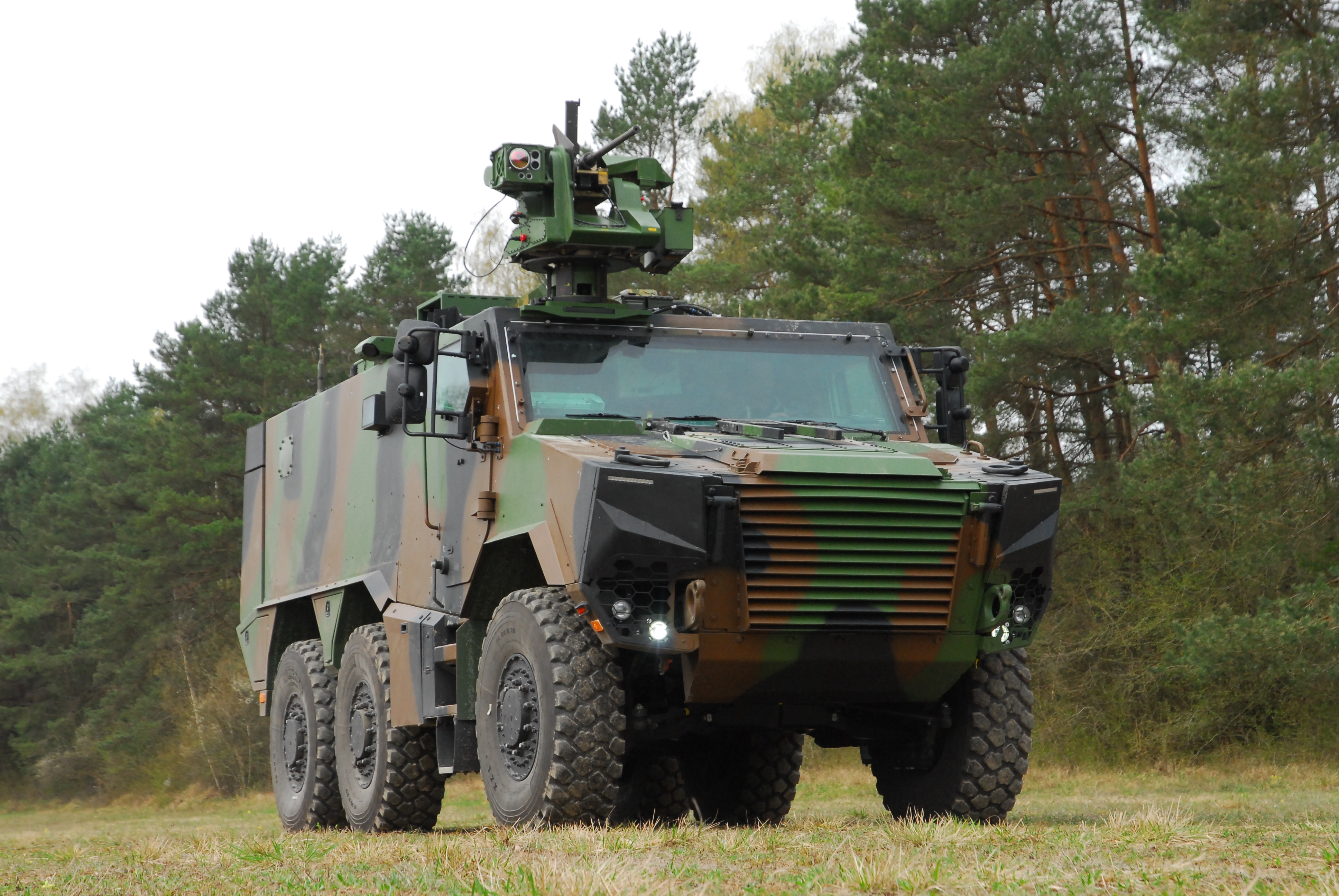 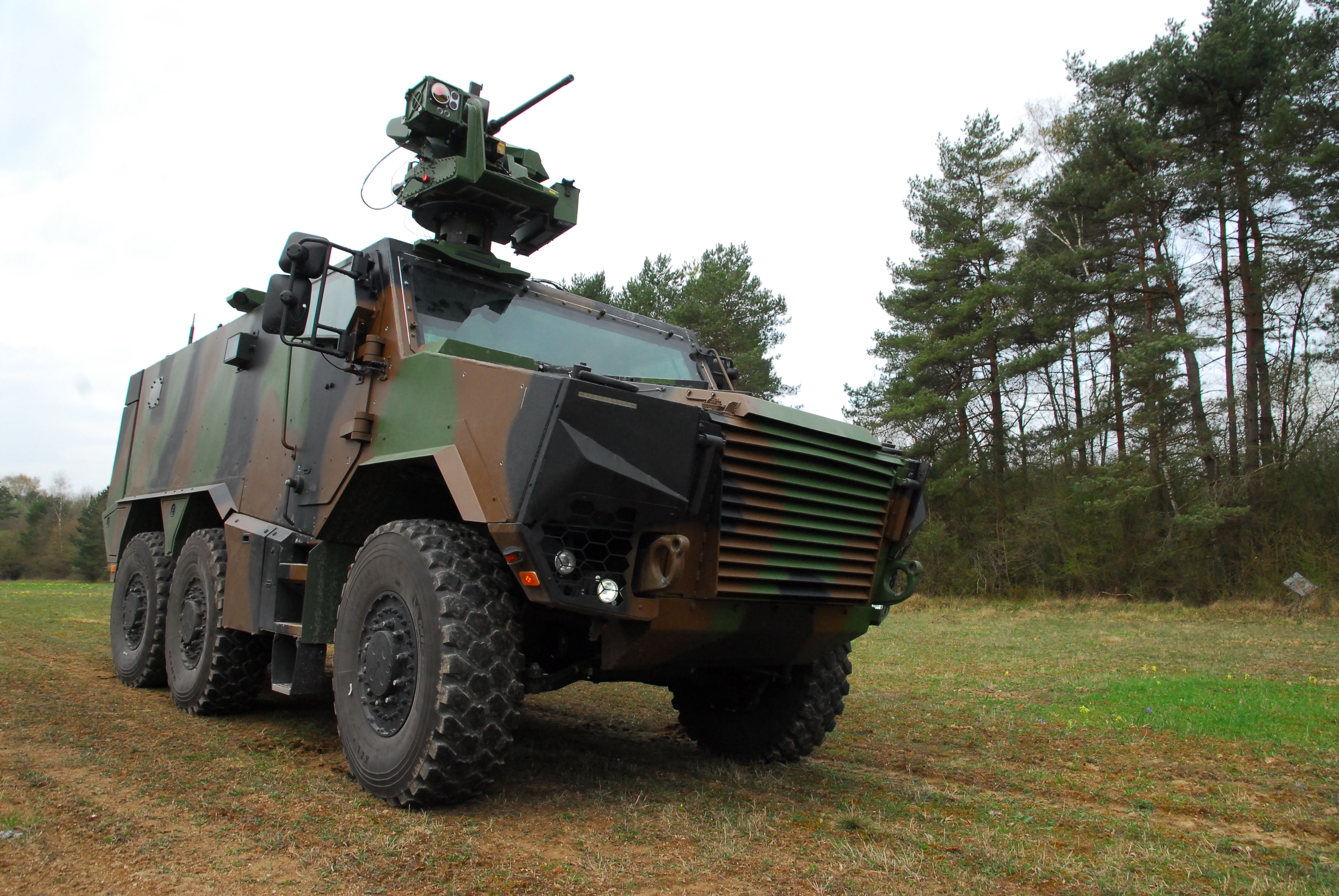 
The French Army will deploy at least 10 variants of its new 6×6 Griffon Véhicule Blindé Multi-Role (VBMR) with additional models, including a mortar carrier with a turntable-mounted 120 mm mortar, to be developed and deployed in the future.

The artillery observation vehicle is referred to as the Griffon Véhicule d’observation de l’Artillerie (VOA). Thales is the prime contractor and system integrator for this variant and will provide a complete day/night reconnaissance suite that supports target acquisition for air- and land-based weapon systems.

It will have telescopic mast on top of which is fitted a day/night sighting system and a laser target designator coupled to a GO12 battlefield surveillance radar.

The baseline Griffon VBMR will have a crew of three consisting of the commander, gunner, and driver and carry eight dismounts. It will have a gross vehicle weight (GVW) of 24.5 tonnes.