Saab has flown its active electronically scanned array (AESA) X-band radar in a Gripen fighter for the first time, the company announced on April 24. The flight took place at Saab’s Linköping airfield on April 8. During the 90-minute sortie undertaken by a JAS 39D trials aircraft (serial 800), the radar was successfully tested against aerial targets of opportunity and a range of ground targets. Speaking to AIN, Anders Carp, senior vice president and head of Saab's Surveillance business area, noted that the radar demonstrated good capability and stability throughout the test mission.

Under current plans, Saab expects to continue initial radar trials for around three to four months, with Gripen 800 due to fly around 15 times with the new sensor. As part of the evaluation, the radar will be employed against fighter targets.

The new AESA array is made up of hundreds of transmit/receive modules (TRMs), each one essentially a mini-electronically scanned radar. Radars made with GaN semiconductors have better performance—notably in terms of electronic counter-countermeasures, small target detection and wider bandwidth—than most current AESA sensors that employ gallium arsenide (GaAs) TRMs, while consuming less power and generating less heat.

What is now currently known simply as the “Saab AESA fighter radar” comprises the GaN array married to the back end of the PS-05/A Mk 4 mechanically-scanned radar that is the current option for the Gripen C/D. Saab has built virtually all of the elements of the radar itself, including the TRMs that are manufactured in a foundry at the company’s primary radar design and production facility, the former Ericsson plant in Gothenburg. The company began ground-testing of the array well over a year ago.

In the Gripen installation, the array is fixed with Saab opting for this configuration due to its simplicity and reliability. The concept of using a repositioner was initially discarded as advanced digital processing can overcome most of the problems associated with radar performance at the outer edges of the scanning volume without adding the internal space required to accommodate a repositioning system. However, Carp commented that a repositioning system could be employed if trials showed that it was necessary.

The array is essentially the same as that which was ordered in late September 2018 for what Saab describes as an "undisclosed U.S. government customer". At the same time, however, the Pentagon announced the award of an $8.2 million contract to Saab USA for the research and development of an "active aperture array". The contracting agency was Naval Air Systems Command, with the array being intended for the Office of Naval Research and Office of the Secretary of Defense Foreign Comparative Testing Program. Saab has already flight-tested this array on another testbed in support of the U.S. program and delivered it to the customer earlier this year.

Saab claims that its new ITAR-free array is ready to go to market, and would take between 12 and 18 months to deliver given the need to complete development and testing, and to establish production. The radar has an obvious application as a retrofit for Gripen C/Ds, and could also be included as an option instead of the PS-05/A Mk 4 for new C/D sales, with the potential of revitalizing that aircraft’s sales prospects. Other opportunities include other fighter types, particularly as an upgrade option.

The company sees opportunities for the X-band radar beyond fighters, including installation in advanced trainer and aggressor aircraft. Moreover, the radar has been designed in a modular fashion, and is scalable. This opens up a wide range of applications, including scaled-up radars of almost Erieye ER size for X-band surveillance. Ship- and UAV-based opportunities are also being studied.

For now there are no plans to equip the new-generation Gripen E/F with the GaN radar as the GaAs-based Leonardo ES-05 Raven is fully integrated for that requirement, but it could be substituted if a customer specified it. Saab also points out that the work being performed by the company on an AESA radar for the KF-X fighter in collaboration with South Korean industry is a separate project. 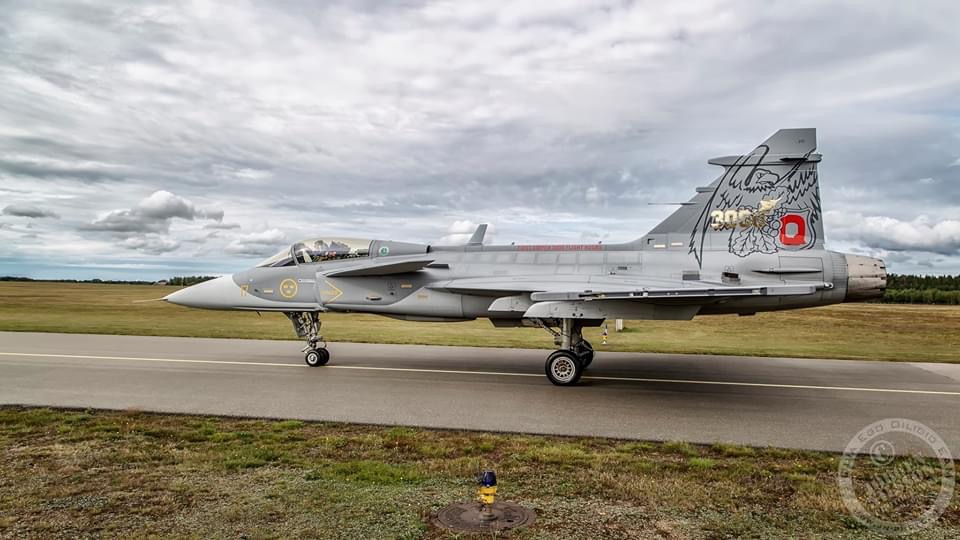 
As part of Gripen’s E/F Electronic Warfare capability, Saab now reveals the development of a new decoy missile system, the Lightweight Air-launched Decoy Missile. The decoy missile and the new Electronic Attack Jammer Pod, which Saab started flight testing in 2019, will ensure that Finnish pilots will be protected from enemy radars and missiles.

The new decoy missile will be a highly capable stand-in jammer for the most demanding missions. It will act as a force multiplier as it reduces the number of missiles and aircraft required to complete a mission. The decoy missile can jam or create false targets for acquisition, tracking, fire control and airborne radars.


The Swedish Air Force (SwAF) will retain a number of its Saab JAS 39 Gripen C/D fighters beyond their current planned 2026 retirement date, solidifying an earlier announced plan to make up an anticipated shortfall in Gripen E numbers.

Of the current six Gripen C/D squadrons fielded by the SwAF, four are set to transition to the Gripen E over the coming years. As revealed in Hultqvist’s latest announcement, the two outstanding squadrons will remain operational with their existing Gripen C/D aircraft.

In 2017 Janes first reported comments made by a senior SwAf officer who said that with only 60 Gripen Es to be delivered from 2022 through to 2026, the service was mooting the possibility of retaining a number of its 73 Gripen Cs beyond this final delivery date to address a numbers gap (it had already been disclosed that a number of the 24 twin-seat Gripen Ds would likely be retained as operational trainers).

Although retaining a number of Gripen Cs was an option, at that time there was no additional money to fund such a plan. As noted by Saab, not only is the money now there but a date of ‘beyond 2030’ has been set for their retention.


The Swedish Air Force (SwAF) currently fields approximately 100 Gripen C/D aircraft, which it originally intended to replace with 60 Gripen Es. However, it was recently disclosed that an unspecified number of Gripen C/Ds would be retained through to 2035 to help boost overall numbers. According to Hultqvist’s comments, the service will now retain 40 Gripen C/Ds, though he has yet to break this figure down into the number of single seat Cs and twin seat Ds. The total Gripen force will be divided between four Gripen E squadrons and two Gripen C/D squadrons.