The Squadron will operate the Insitu ScanEagle, a small, long-endurance, low-altitude aircraft and the Schiebel S-100 Camcopter, which can carry payloads such as electro-optics and infrared sensors. 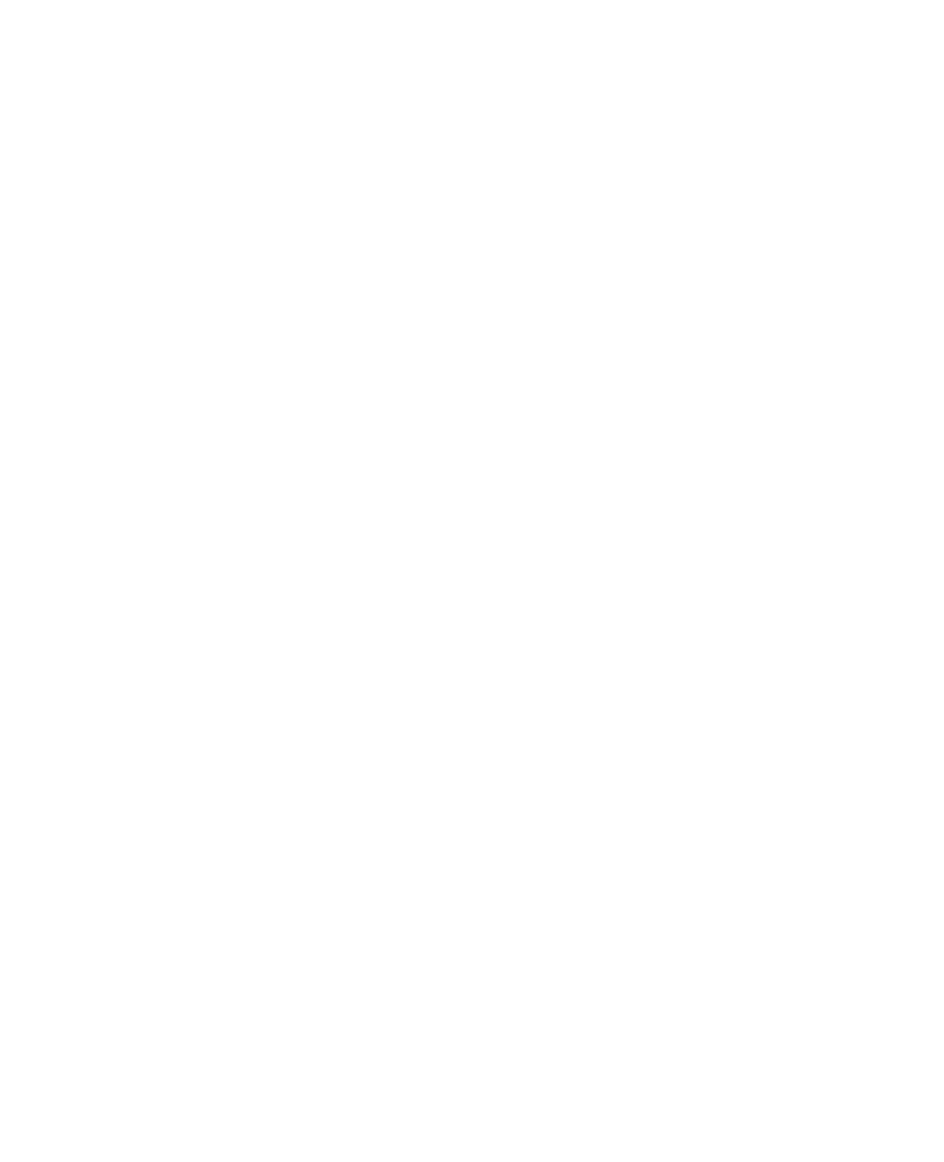 Hirtenberger Defence Systems (HDS), recently branding itself as “The Mortar Company”, announced at Eurosatory a product-related partnership with ST Engineering from Singapore, centred on their futuristic-looking 120mm automatic launcher SRAMS or 'Super Rapid Advanced Mortar System'. HDS' UK-based subsidiary is to open up the European market, which is otherwise difficult for Asians to access, with an Austria-made fire-control system and three types of ammunition approved in Europe. These include the new highexplosive (HE) CONFRAG Mk.3, with 60% increased splintering effect, or lethality as it is known in the trade, in addition to smoke, light or IR (parachute) grenades. CONFRAG is also offered for the 60mm and 81mm launchers.

The idea behind the cooperation with ST, which celebrated its 50th anniversary in 2017, is that the SRAM's ingenious recoil damping system (reducing recoil to below 26 tons) makes it possible to fire the launcher from many commercially available wheeled or tracked vehicles. According to HDS Vice President for Sales and Marketing Carsten Barth, the launcher can also be retrofitted on 4x4 platforms or Hägglunds-type vehicles as well as all multipurpose 6x6 and 8x8 wheeled or tracked multipurpose vehicles.

As announced in Paris in spring, HDS has organised live-firings for demonstrational purposes, for instance in late September 2018 at the Austrian Federal Army‘s firing range in Felixdorf, which would have been difficult to organise for the ST team around chief engineer James Teow Soon NG and General Manager Chor Kiat Tan. The firing range is only a few kilometres from HDS’s headquarters and production site in Triesting valley south of Vienna. This time, military, government and industry representatives from countries such as Germany, Latvia, Estonia and Slovenia, who are potential customers who would otherwise be more difficult for Singaporeans to reach, took part. ESD was also there.

However, because of rigid safety regulations, only the (blue) training ammunition with a small target marker charge was allowed to be used, expectations regarding the experience of real 'firepower' remained rather unfulfilled. The small grey clouds at different distances were hardly visible. What was well demonstrated, however, was the rapid firing sequence of up to 10 bombs per minute. This is achieved by the rapid mechanism of the loading carriage, which takes only seconds to muzzle-load each round into the 2.1-metre-long mortar tube. The Pandur II CZ FSV is fitted with the Belgian CMI Defence CT-CV 105HP turret, which is armed with a 105 mm rifled gun fitted with a thermal sleeve, fume extractor, and muzzle brake. The gun is fed by a bustle mounted automatic loader that holds ready for use 105 mm ammunition.

The turret also features a co-axial 7.62 mm machine gun (MG) and an additional MG mounted on the left side of the turret roof. It is also provided with a bank of four electrically operated smoke grenade launchers. 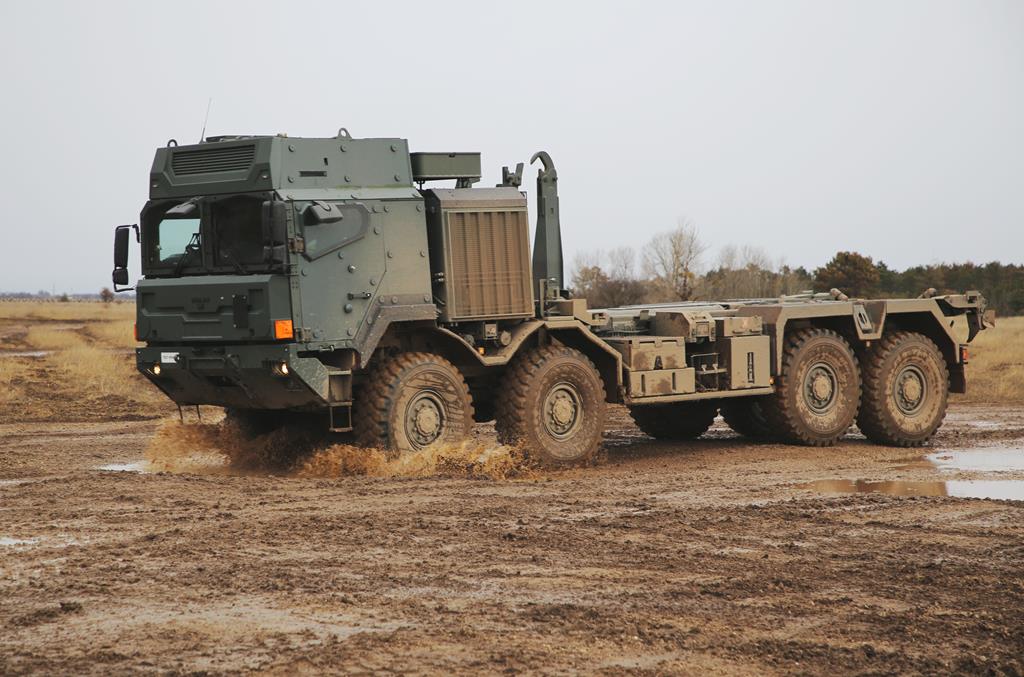 Five trucks were awaiting us on the test track located close to the Jansa-Kaserne at Haschendorf, 35 km south of Vienna. 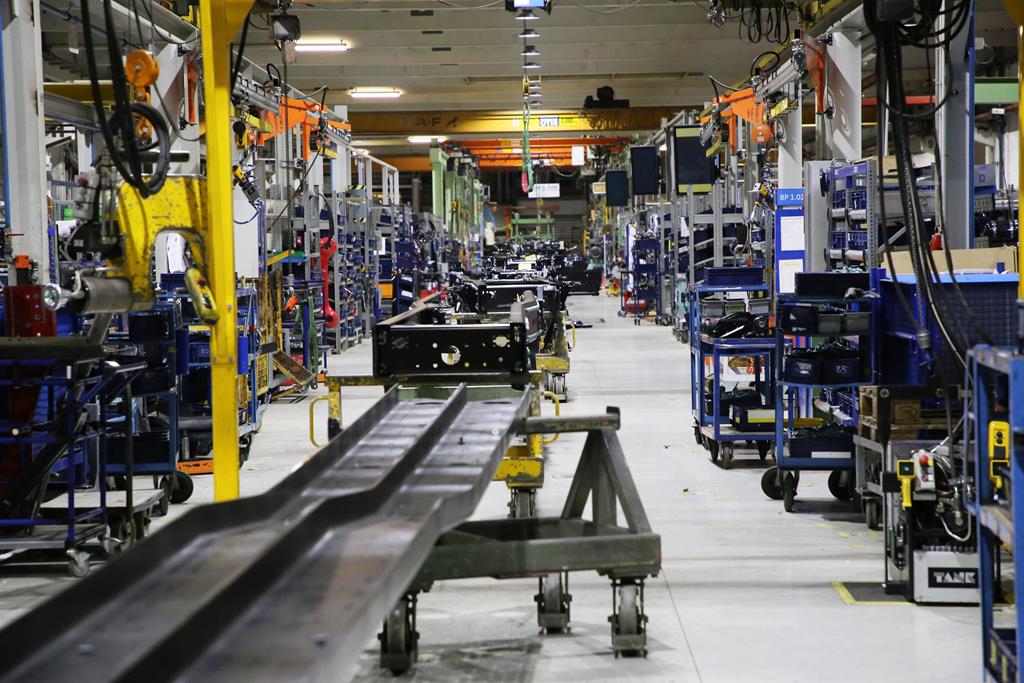 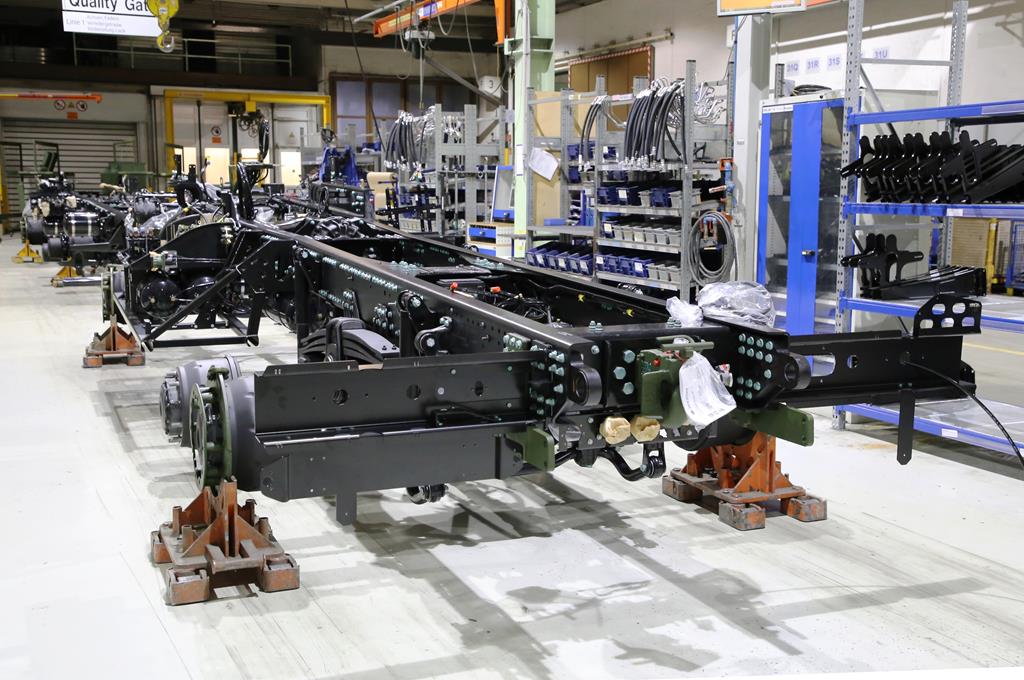 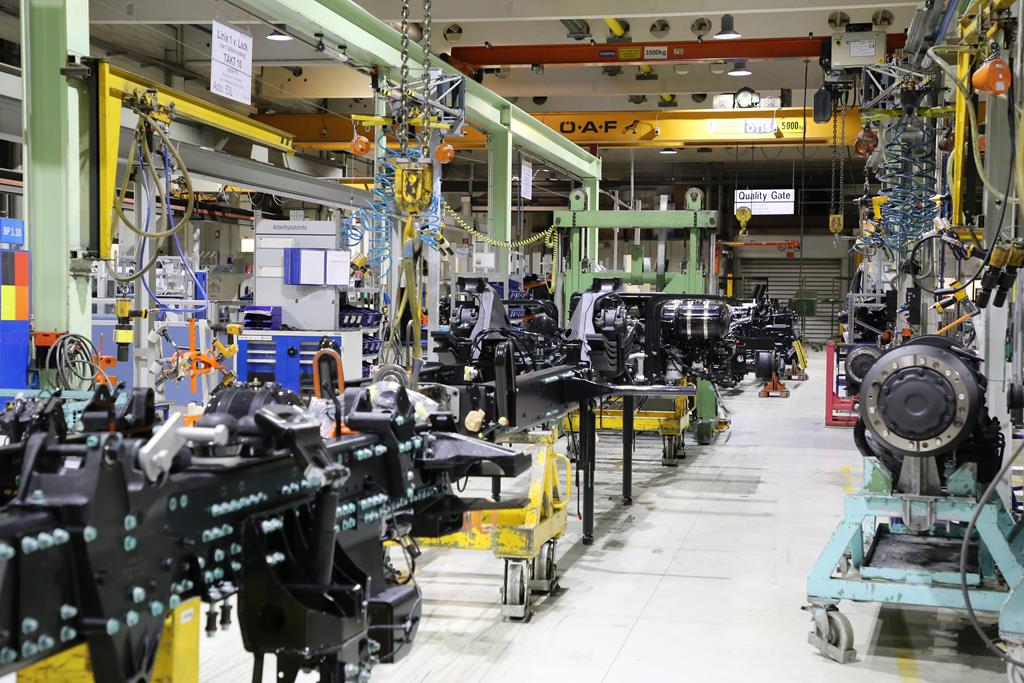 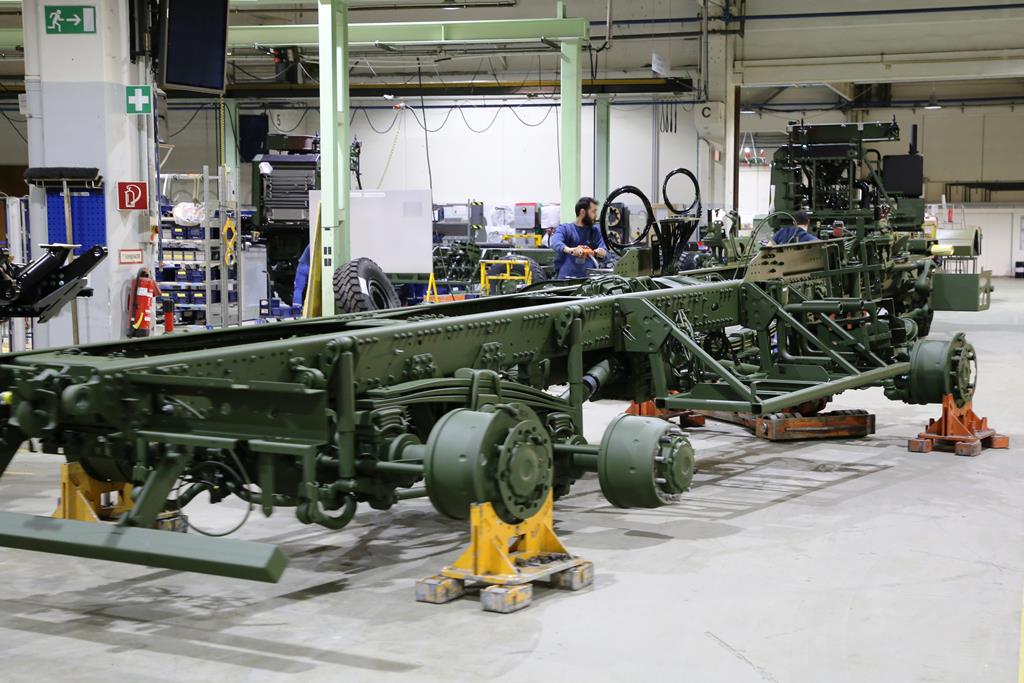 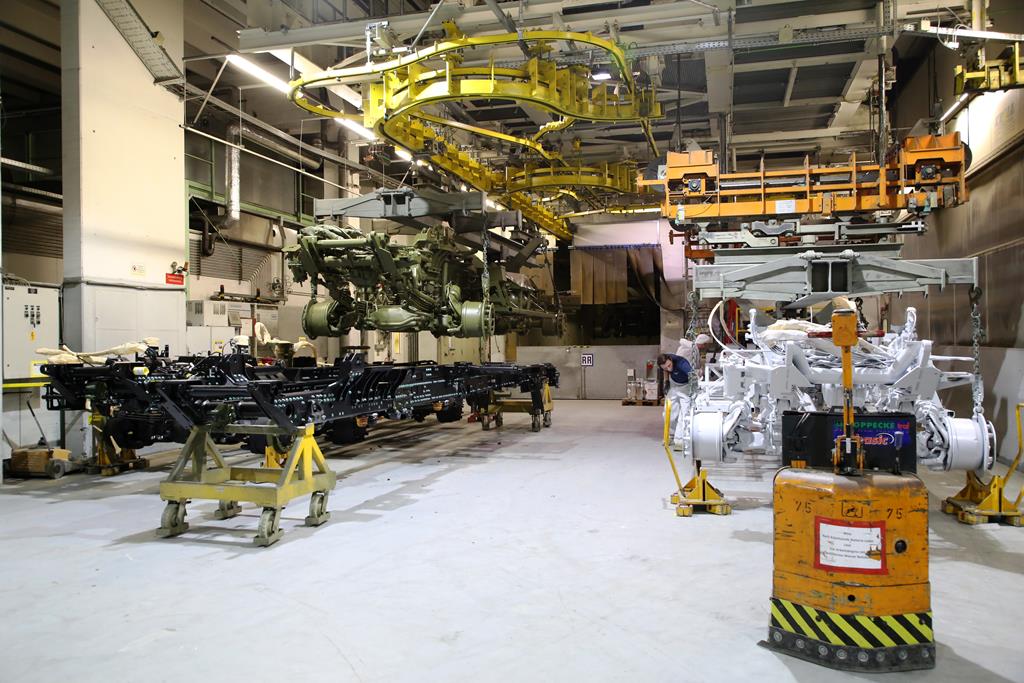 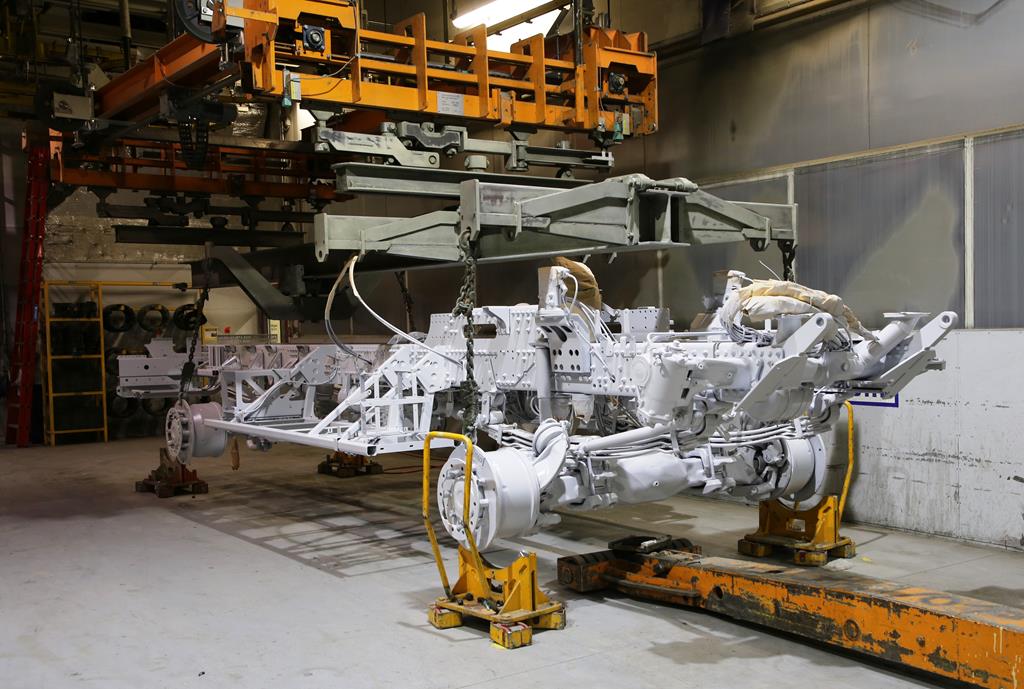 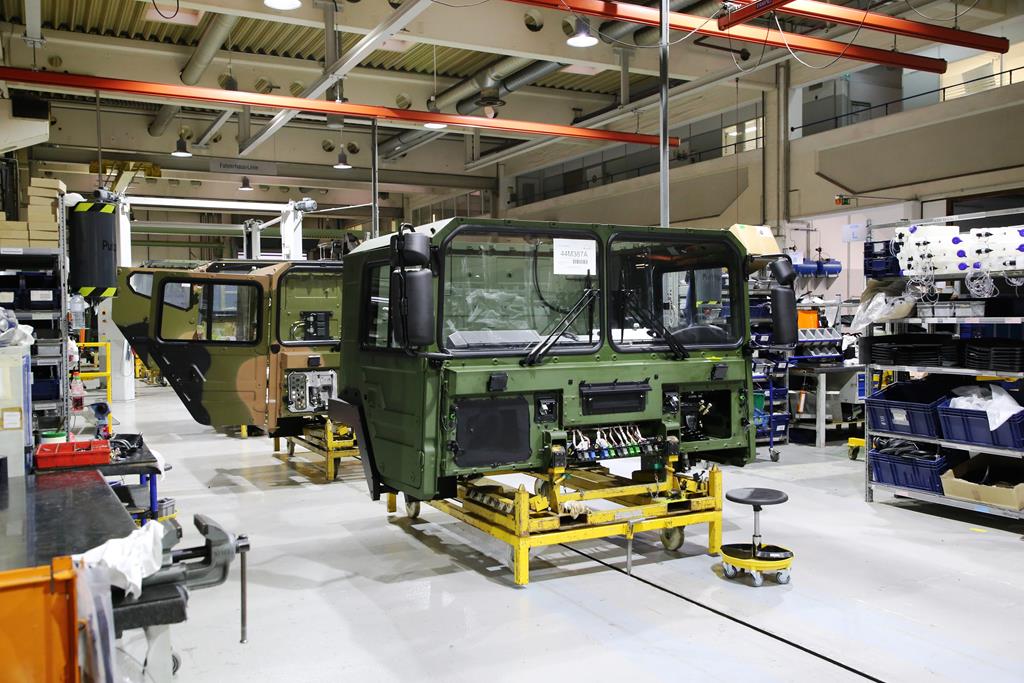 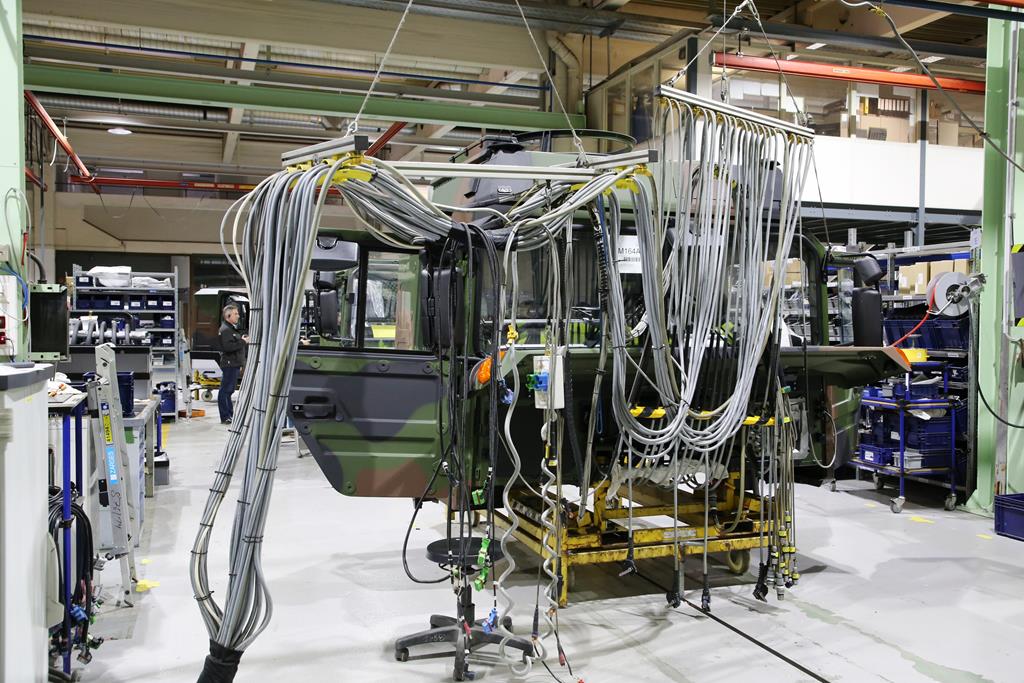 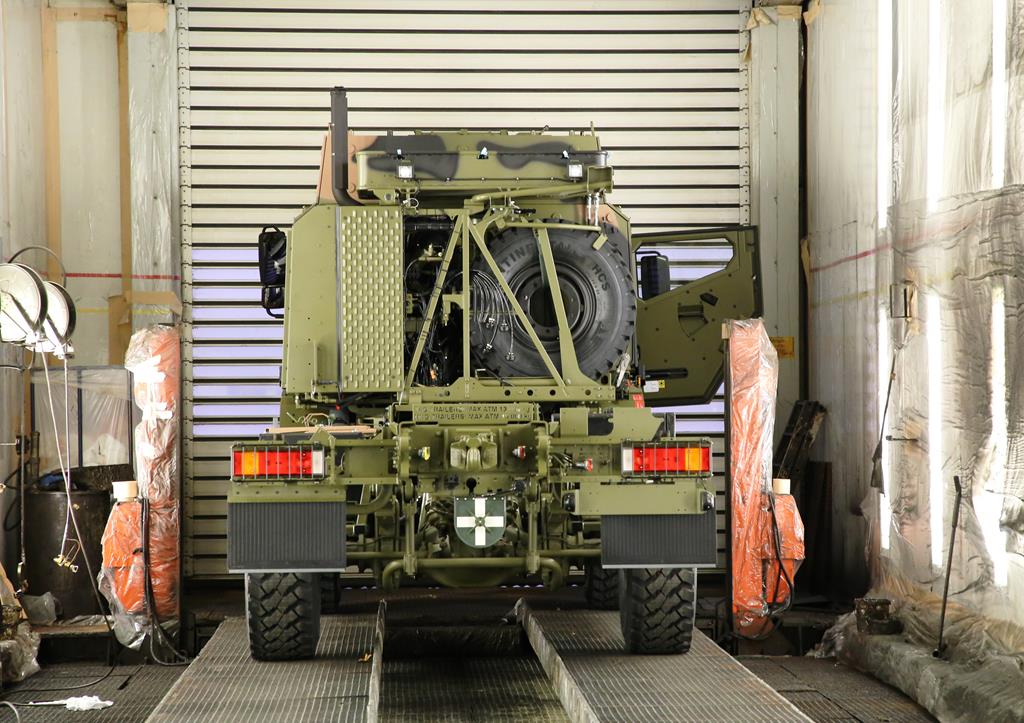 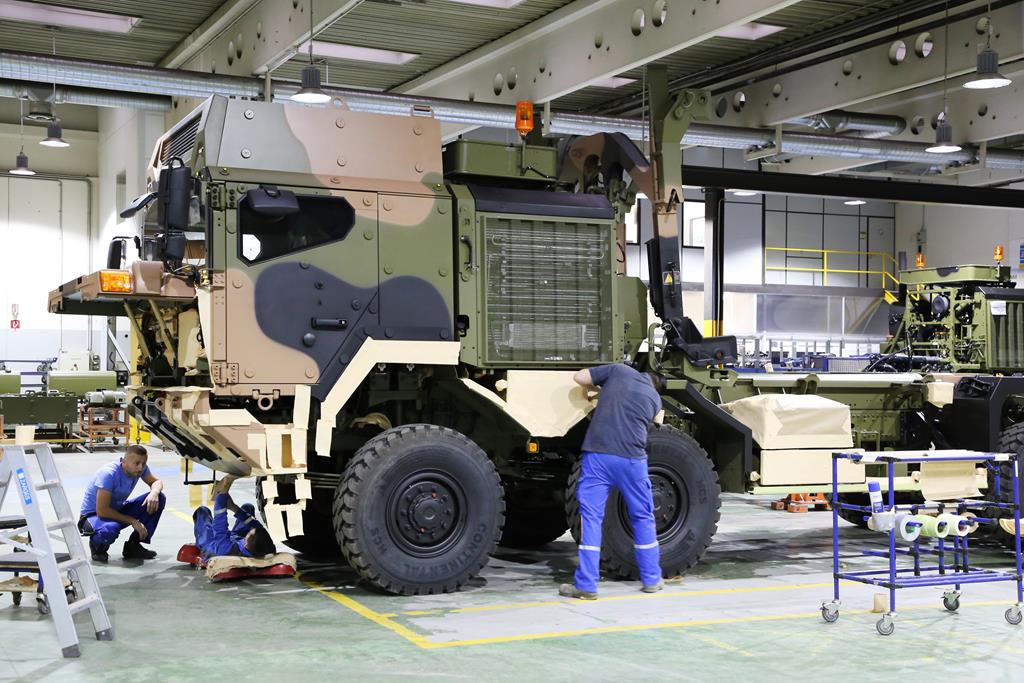 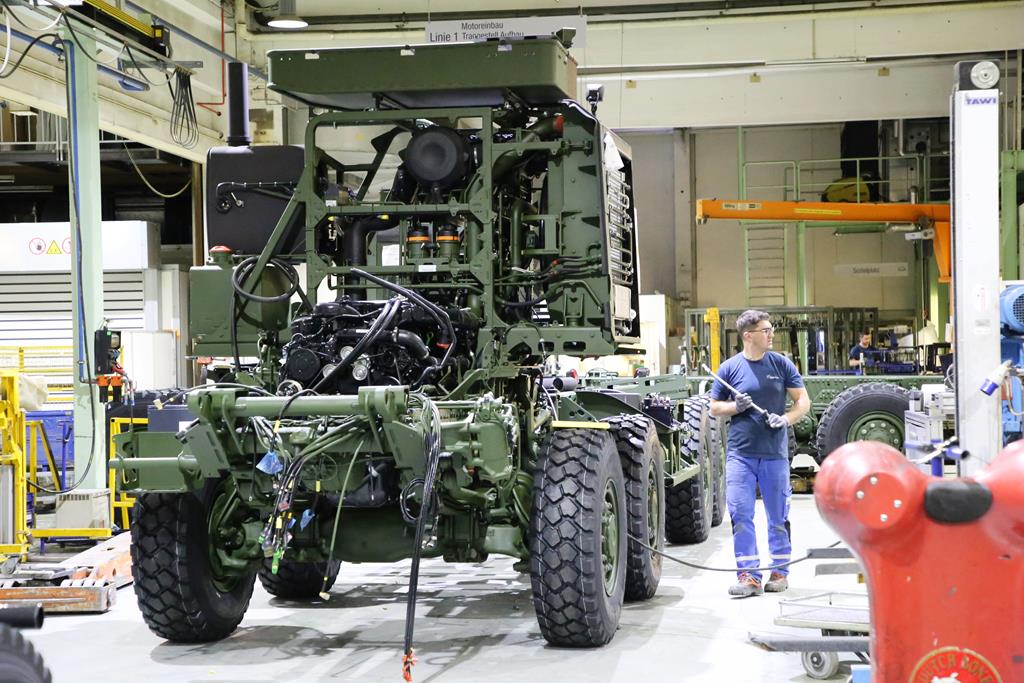 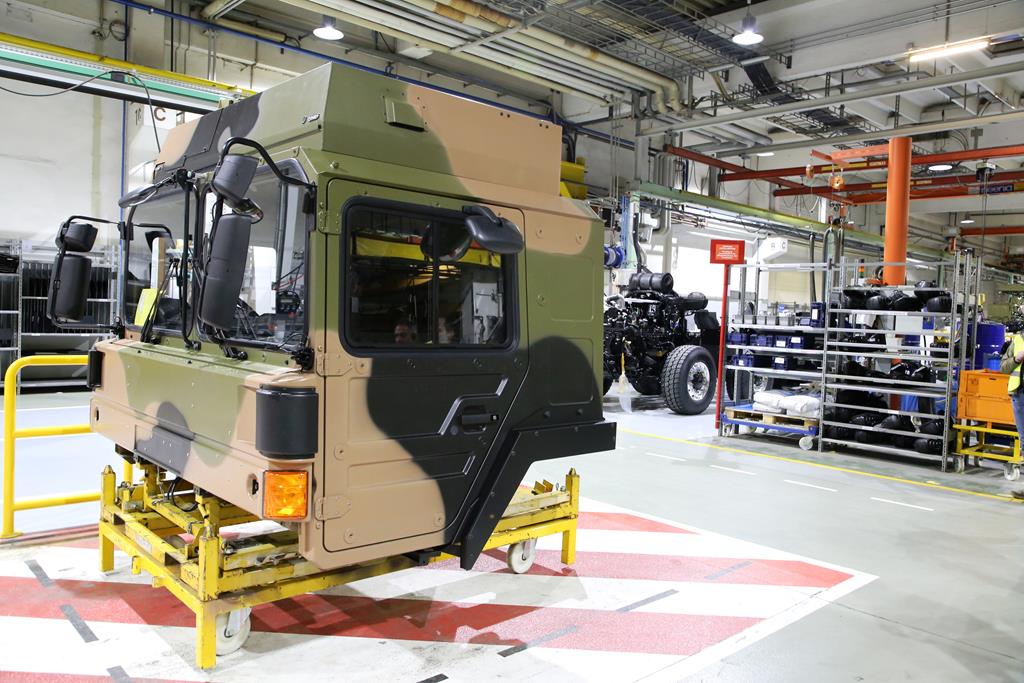 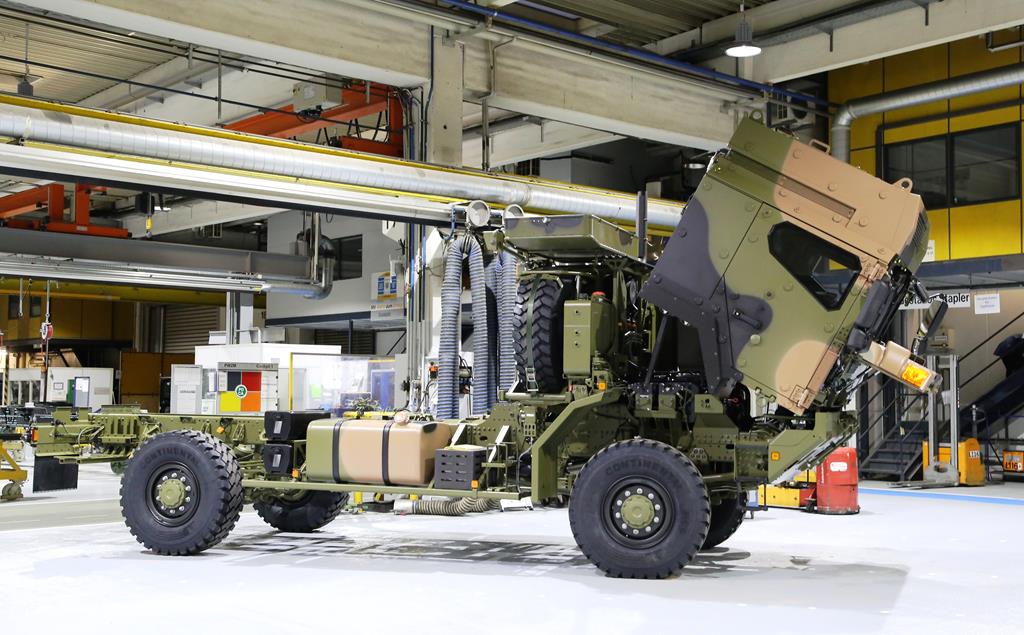 However the true raison d’être of this plant is the production of military trucks, that is the HX family, currently produced at the HX2 standard. These are developed and designed in Vienna, RMMV being the design authority, the company having over 160 engineers in its R&D department. All HX trucks, from 4×4 to 8×8, are fitted with MAN axles, the front one being an 11 tons drive/steer axle. Engines, also provided by MAN, can be chosen with an output of 340 hp, 440 hp, 540 hp and 680 hp, depending on the vehicle and of the use. Normally the unprotected and the protected versions of a truck feature the same engine, extra power being sufficient to ensure maximum mobility even to the heavier protected version, only acceleration being slightly affected.

The Rheinmetall facility in Vienna goes beyond a simple truck OEM, its R&D department being constantly looking for new technical solutions. One of these is the adoption of a torsion-free subframe dedicated to HX trucks, allowing decoupling the payload from the vehicle in terms of torsion; compared to standard solutions in use, this allows cutting weight by about 400 kg, which are immediately transformed into payload, and to reduce the overall height, with beneficial effects on stability. These new frames are also assembled on the production line in Vienna. A typical R&D work is C4I integration into the cabin; currently the most advanced C4I architecture which is being integrated into HX trucks is the one required by the Bundeswehr into the vehicles part of the Ungeschützte Transportfahrzeuge (UTF) contract, their cabin being the one requiring the longest assembly time. Its roof, strengthened to accept a light weapon station, is fitted with air conditioning, as well as NBC filtration system for protected cabs, a box for the machine gun spare barrel, and a GPS antenna; armoured cabins are produced at Rheinmetall’s plant in Unterlüß, northern Germany.

With the production of Land 121 Phase 3 B for Australia running until 2020, the framework contract for Norway and Sweden that has a potential up to 2,000 trucks running until 2026, that of the UTF German contract concerning potentially 2,271 trucks planned until 2023 (105 of the 110 planned for the current year have already been delivered, the remaining being currently under delivery, 558 having been ordered with the first contract), the new Land 121 Phase 5B contract for further 1,044 trucks planned from 2020 to 2024, the production line in Vienna will be quite busy in the next years. Other contracts are also running for customers that ordered smaller quantities, usually between 50 and 200 trucks. Currently the plant is delivering 11 trucks per day in one working shift, usually 10 standard trucks per day and one specific truck, such as i.e. a 10×10. It is to note that the latter is the only one that does not use an all-MAN axels solution; while it keeps the front 11 tons drive/steer axel, rear axles are provided by Sisu and feature hydropneumatic suspensions instead of the usual leaf springs. The average amount of work required is around 300 hours per truck, although some specific vehicles can require more than the double, Australian 10×10 reaching 800 hours. The aim of Rheinmetall is to increase the production up to 14 trucks per day; this will be done improving the layout of the production line and increasing the workforce, the aim being to reach 12 trucks per day in mid-2019, 13 in late 2019 and finally 14 in mid-2020. The blue collar workforce in Vienna is around 500 people, the assembly line working as said on one shift while the painting and parts manufacturing, the company produces internally all hydraulics piping, work on 2.5 shifts.

On Line 1, the one dedicated to standard HX trucks production, work is organised on 31 Takt positions, each served by 6-8 workers, Takt time[1] being of 45 minutes. A U-shaped line, the first part is dedicated to chassis assembly, and brings up to the painting area; as this process cannot match the Takt time, a buffer zone has been created. The company is equipped with laser cutting machinery, bending and welding systems, which account for 20% of the production, usually small series or prototypes, while 80% of this work is subcontracted, chassis elements being thus delivered to the Brunner strasse facility ready for assembly. Chassis painting is not required for commercial trucks, however to cope with the strict military standards this remains a must for the HX line. Following the treatment with solvent-based paint, the assembly continues, with the integration of superstructures; the need to have a 1.5 meters fording depth capability led to the design of an integrated cooling unit which is mounted at the rear of the cabin, another unique feature of RMMV trucks. Currently 6 cabins for military models are produced per day in Vienna, integration of C4I and other elements being the key issue; as the percent of HX trucks versus militarised and commercial trucks is increasing, the company is looking at thrusting the cabin production up to 10 per day.

In order to cope with strict anti-pollution regulations, RMMV is working together with MAN on a new Euro 6 engine and exhaust washing system that will allow military trucks to use NATO standard quality fuel. Difficulties stem mostly from the vibrations to which a military truck is submitted, which considerably affect the highly complex system. Not yet available, when this will be installed it will allow trucks to deploy downrange using without problems both standards as well as jet fuel. RMMW and MAN aim at qualifying the new propulsion system by late 2019, when it will become the first military powerpack at Euro 6D standard available on the market.

The acquisition of Supashock shares was not aimed simply at the ALHS17, the main interest being the company know-how in the suspension field, active and passive reactive suspensions being part of the Australian company portfolio. An 8×8 chassis should soon be equipped with active suspensions for trials, while other innovations are being considered, i.e. in the cabins and in the vetronics areas. The company is also thinking to what the future trucks driveline might look; while all electric will probably never be a solution in the military field, hybrid solutions might well become viable. What seems clear is that at Eurosatory 2020 RMMV will show its concept for a next generation truck. 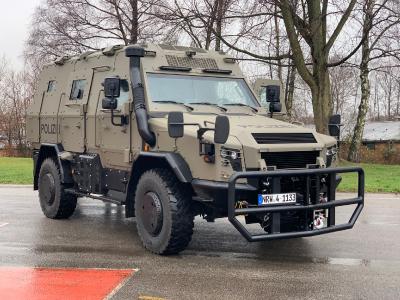